Are people ready for a change? Sure Obama promoted “change” in his 2008 campaign. Regardless if he actually brought the “change” to D.C. one thing’s for sure, he recently brought a dramatic change in the direction of stock market, with DOW crashing at least 200 points a day it seems. But is America finally ready to accept the change on our perspective of who we are as people? Is America’s heart bleeding not just red, but white and blue too?

I recently had a fairly lengthy discussion with my boss at work the other day that sort of got me thinking. My manager Jon, is one of the nicest person I have ever come across. The “99” has a three interview process per corporate rules. I walked in for my second interview greeted by this man and he made me really feel at ease. We talked, I handed him my resume and not a negative word came out of this man’s mouth. He was actually I think in amazement that a 4 foot figure has his act together. Mid-interview he goes, “Why do you live in Manchester, you should be in Hollywood.” I barely know this man, he barely knows me and he already comes to that conclusion? Woahhhh I try to impact people as much as possible, hoping to leave them with at most a smile of satisfaction. I didn’t really take it too seriously, but laughed and appreciated the compliment. 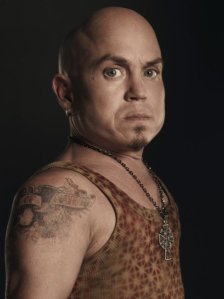 I closed with him last week, and when I was checking out my draw with him he brought it up again. He asked me if I have every watched “The Cape” and I answered saying I’ve seen an episode before. In the “The Cape” a dwarf is the main character, Marty Klebba. Like most people would assume, all dwarfs must know each other. Fortunately to keep the conversation going, I have met him before in NYC for a LPA Convention. He told me to talk to him and ask if he could get me “in” and become a star. I just smiled and told him that I would, being polite.  He than asked me a question, that took me by surprise. It was something along the lines like “Mat, when was the last time you cried?”  We sort of have this comfort level, that you don’t really have with many bosses throughout your life. I actually paused and thought about it. I told him what he wanted to hear and what was the truth, “With words, I feel no pain. There won’t be a finger point, a stare or a witty comment that will bring me to tears anymore. I have sorta developed this skin that is thick, that nothing of that sort will ever get through and reach my heart. The last time I cried was over a break up, but before that probably a cracked head.” He asked if I remembered that last time I cried over being Matty Myers. I was honest and told him that I am human, and I do have mental breakdowns every once and a while, and those come usually when I am reminded the most that I’m different. The last one came when I saw the movie “Little Man.”

This entire time he was being tremendously supportive, encouraging and friendly. I hope I’m not making him out to be rude and disrespectful. Because I enjoyed this conversation with him, and would with anyone. I like “reality checks” and conversations where the party is intrigued and interested about life in smaller shoes. I encourage them, and promote them as learning opportunities to pave the path for future lp’s that will be waddling around when I reach my dead end. We than discussed why I should live my life worry free. I had admitted that tomorrow is always on the back of my mind. That I have to be thinking about the future because I have heard of stories before of discrimination to little people in the work force. It’s something that people will tell me on the regular not to worry about, but you are NOT me I have to! It’s something that will always exist. We were all born with a trait  that judges others. When it comes to getting a “big boy job” I already have a demerit against me because I don’t look like a “big boy.” I just want to be given the opportunity to stick my foot in the door. Once that happens, I promise you I’m going to kick it open.

He admitted that all of the managers had gotten together to have a meeting, specifically about my hiring. They talked about whether I could be an asset to the company and if the environment was fitted to my physical handicap. That right there proves my point, the fact that a company has to have a meeting on my hiring to talk out if I am capable of being a  door server. A FUCKING DOOR SERVER!?!? Imagine the meetings that will be going on down the road for more advanced jobs. My future income pretty much depends on a jury made up of potential bosses. Case closed: I have every right to always be thinking about the future.  I am small and incapable of lifting heavy objects; guilty as charged. But what happened to innocent until proven guilty?

It’s always something that I will be aware of, but he told me that the meeting was all positive. He knew from the get go that I could handle this. They thought I would be a tremendous PR asset to the team and work harder than anyone else. He said that my uniqueness is going to benefit me in the future. That people just need a glimpse of me and will be sold. He encouraged me to keep pushing forward, that times have changed. He enforced this confidence in me, that my uniqueness jumps out to everyone in such a positive way, that all questions will be erased.  Jon has become really close to me, and the confidence and faith he has instilled in me I will forever appreciate. Having to leave that job so early, hurts. Working with a team that treats you like family and respects you like a “celebrity” is truly a blessing. Because of Jon, I’m going to shoot Marty Klebba an e-mail. Because I have nothing to lose…and everything to gain.

Let me know what you think! Cancel reply

Quote of the Month: